It's been quite a while since my last blog post though as there have been a fair few new galleries added to the site in the last four and a half months, I certainly have not given up photographing steam trains!

I certainly enjoyed the Gloucestershire Warwickshire Railway's four day Cotswold Steam Festival at the end of May, and that was followed by a visit to the National Railway Museum in York for the Great Gathering of the six surviving members of Sir Nigel Gresley's masterpiece A4 class.

The Great Gathering showed the best of what the NRM can do, and was certainly popular with the general public.   Such was the queue to get in that I'm really glad that I managed to book a place on one of the early morning photo shoots, allowing the opportunity to photograph the A4s and the other exhibits without hordes of other people getting into every shot.

Our summer holiday this year was a very relaxing and enjoyable three week trip by train to Paris, Portugal and Northern Spain.   Although I had planned the trip to include a historical train journey along part of the Douro Valley in Portugal, the persistent hot weather and dry conditions meant that we had a diesel  locomotive on the train instead.   The only steam locomotives that I saw were a number of mostly uncared for static relics, slowly rusting to oblivion, though it was a pleasant surprise to see CP 0-4-0T no. E1 stuffed and mounted at Regua as I had seen this engine in use shunting the yard there on my last trip to Portugal in 1982. 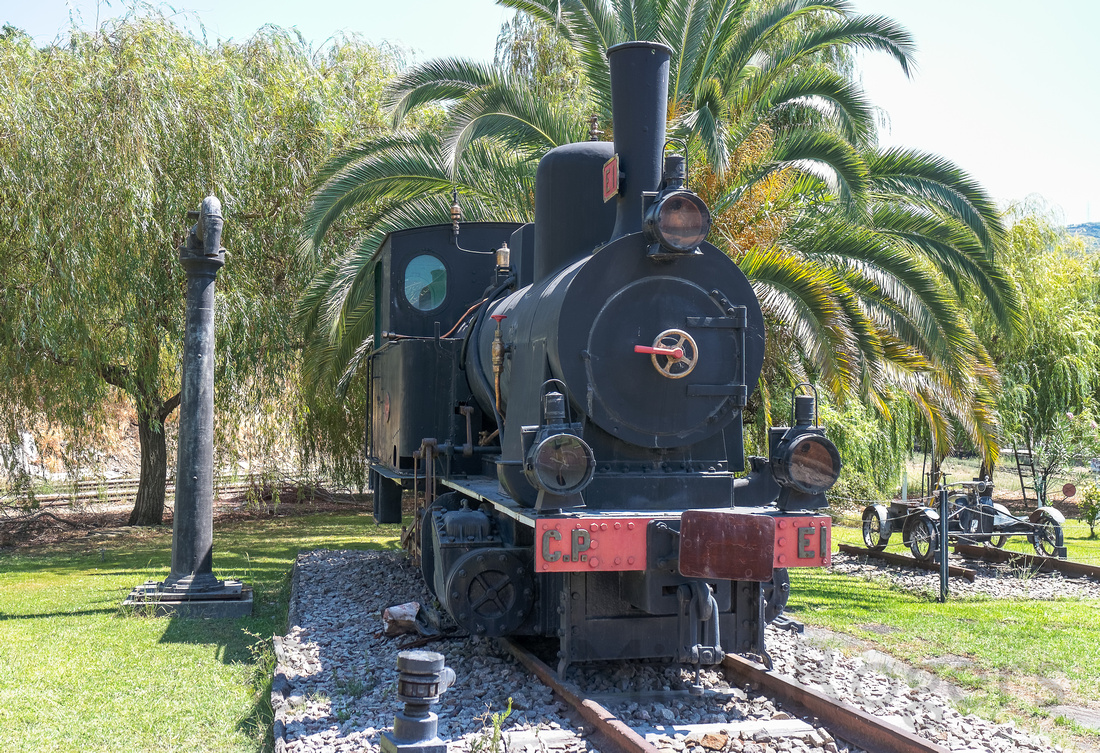 IMG_1162_DxOHenschel 0-4-0T no. E1 sits in splendid isolation opposite Regua station platforms. I last saw this locomotive in 1982 when it was in use shunting the yard serving the metre gauge branch to Villa Real.

September is the start of the Autumn Gala season, and this year has already seen major events at the Pontypool & Blaenavon Railway and Severn Valley Railway.   Having missed out on last years SVR extravaganza, I made sure that I got the most out of a trip to the valley this year by attending on both the Saturday and Sunday of the gala.   I have to admit though, that I found staying awake for 36 hours much harder than I had expected! 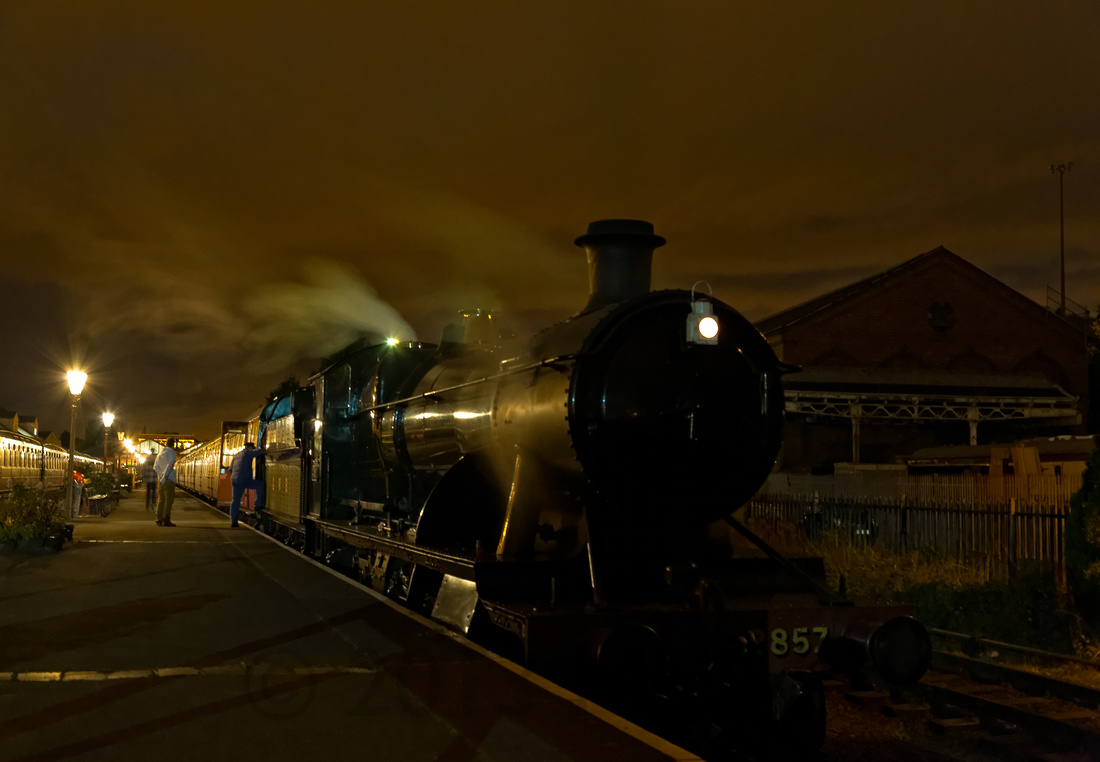 Now it's fingers crossed for some dry weather over the coming weekend as I intend to the galas at the West Somerset and Great Central railways... 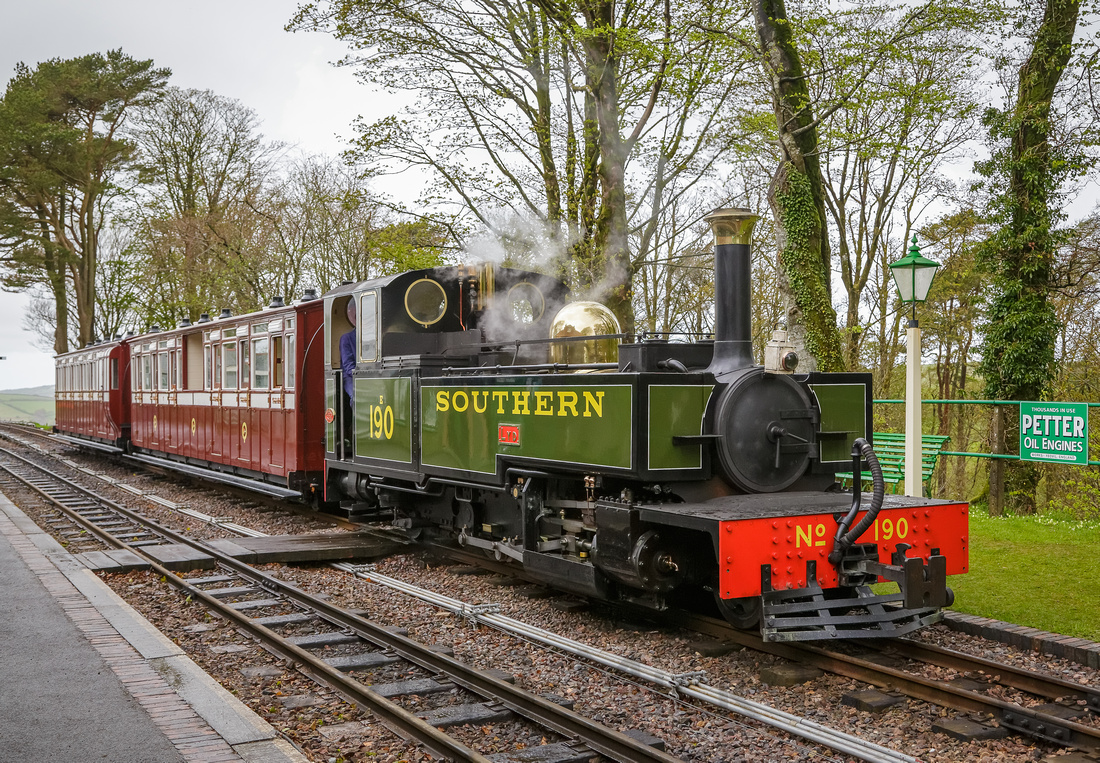 If you've paid attention to the images on this site you will have realised that I don't pay a great deal of attention to narrow gauge steam.   I'm glad to say that that situation has been remedied by a visit on 11th May 2013 to the 10th anniversary steam gala held by the Lynton and Barnstaple Railway.   Although it's currently rather a short line, at little more than half a mile of track, the L&BR has already achieved much since it started from scratch ten years ago and has big plans for expansion in the future, for which I wish them every success.

Somewhat surprisingly, this anniversary gala was only the first time that the L&BR has been able to run an authentic train, using the Ffestiniog Railway's replica 2-6-2T no. E190 Lyd and two original L&BR coaches.   It is to be hoped that this will become a regular feature of the line when its own replica of an L&BR locomotive, Baldwin 2-4-2T no. 762 Lyn, is completed.   I will certainly be back to see that!

Back on the standard gauge, I managed to see A4 no. 60009 Union of South Africa in action on the main line for the first time on Friday 10th May when it worked through Penpergwm with the Cathedrals Explorer from Cardiff Central to Shrewsbury. 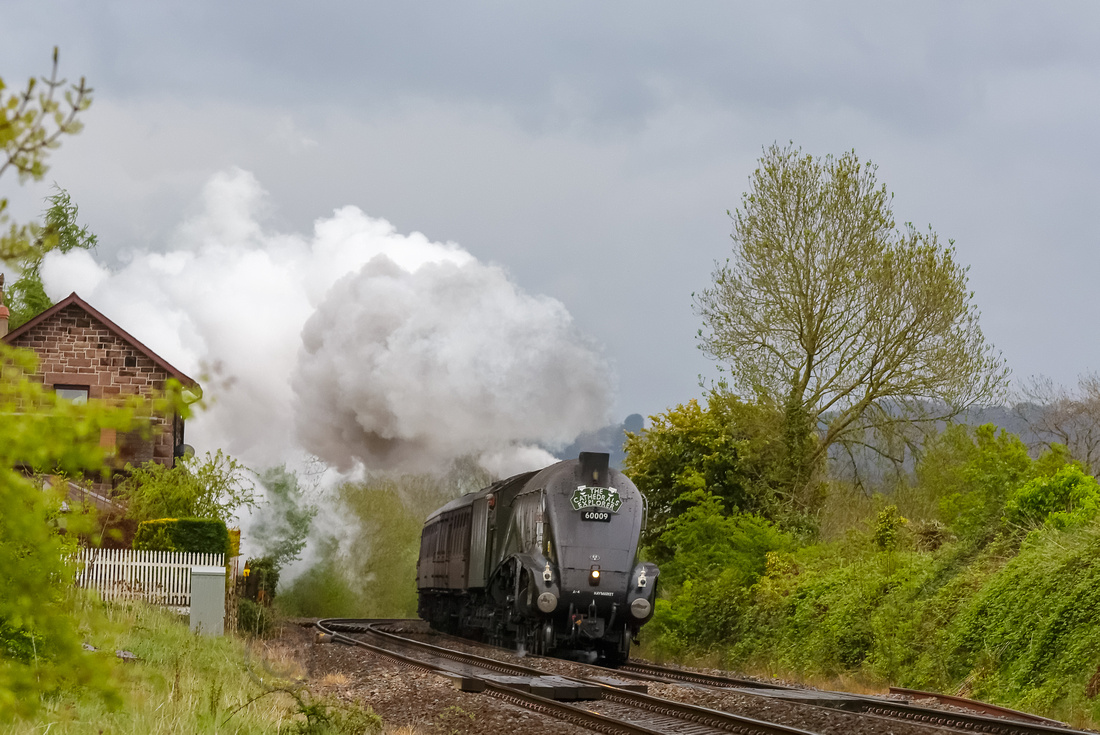 Unfortunately, my plan to see 5043 Earl of Mount Edgcumbe on the Cheltenham Flyer didn't come to fruition.   I made a 20 mile detour on my way home from North Devon, only to find on arrival at Stonehouse that the train had already passed through, running some 45 minutes early!   So much for the published schedule... 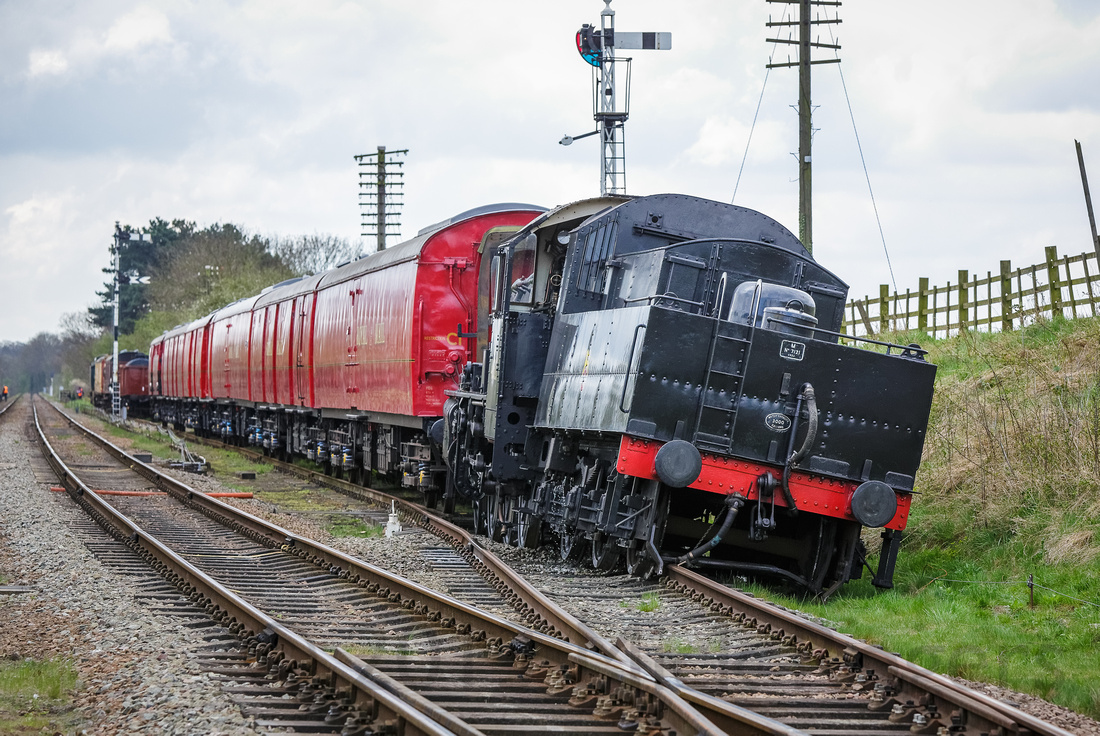 A derailment at the beginning of activities at the GCR on 27th April put the mockers on their planned gala programme, though fortunately nobody was injured when 46521 came off the rails.   Actually, the GCR are to be congratulated on their recovery from this misfortune as they were able to re-jig their timetable within an hour to resume an almost normal level of service for their passenger trains.

No doubt there will be a thorough investigation into the circumstances that led to this accident and we can only hope that, despite bent metal being clearly visible in the above photograph, 46521 has not suffered major damage.

A great shame, as the day was shaping up rather well with conditions right for some great clag! 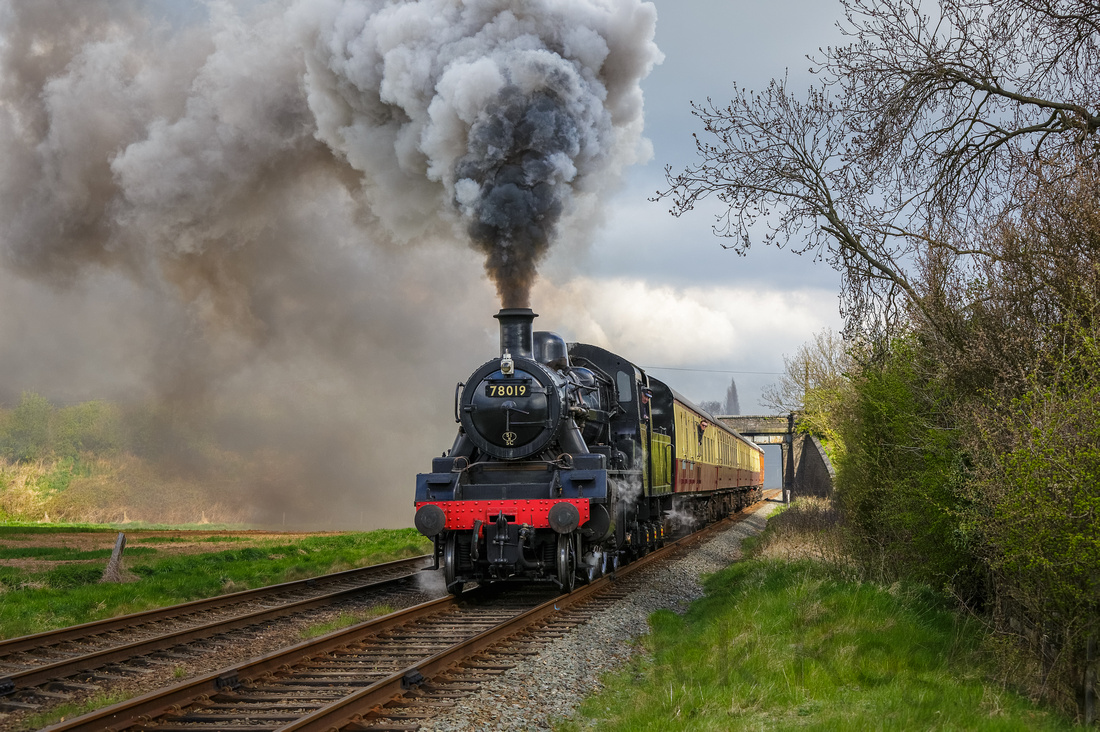 I paid a quick visit to the GWSR on the way home as they were running a three train service for attendees at their wartime weekend.   Definitely an appetiser for things to come at their Cotswold Steam Gala at the end of May - I've already got my four day ticket for that! 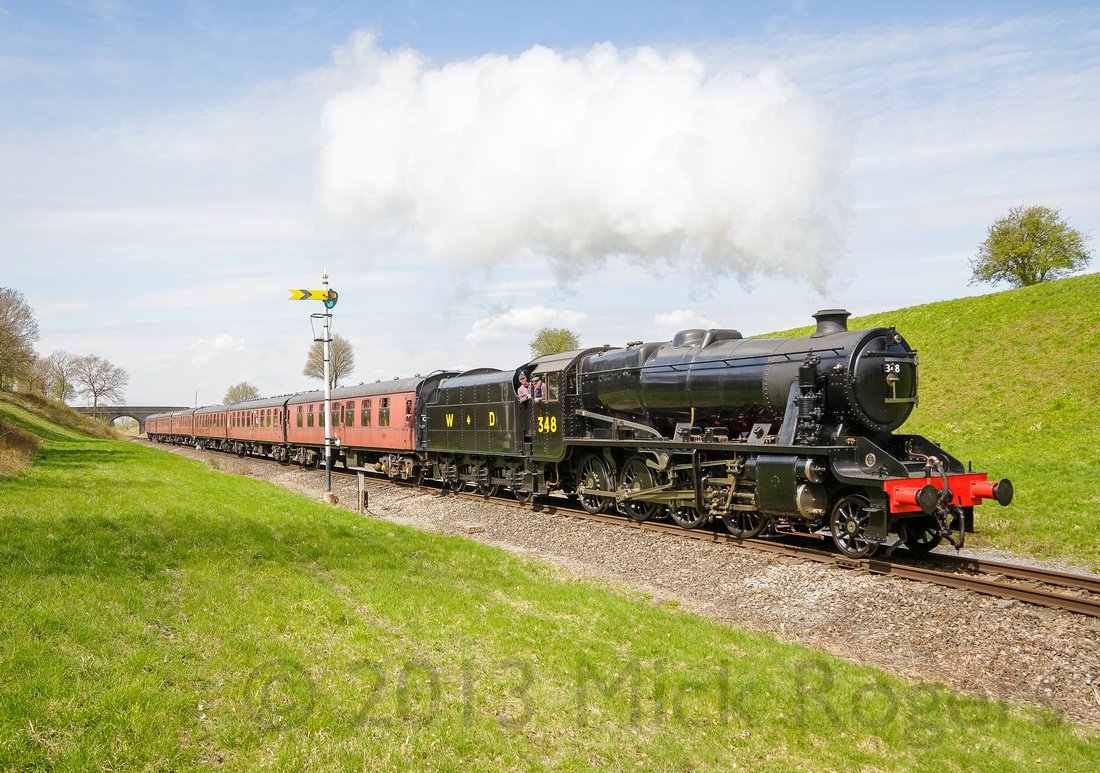 Yes, well, no excuses really for not posting any updates for a while.

The extension of Winter into late March put me off going up to the SVR Spring Steam Gala - perhaps I should have braved the conditions and uncertain roads as I've seen some excellent photography from those brave souls who actually made it.   At least I stuck with the planned photocharter on the Wednesday of the following week, which resulted in some very pleasing images of unrebuilt Bulleid West Country class no. 34007 Wadebridge. 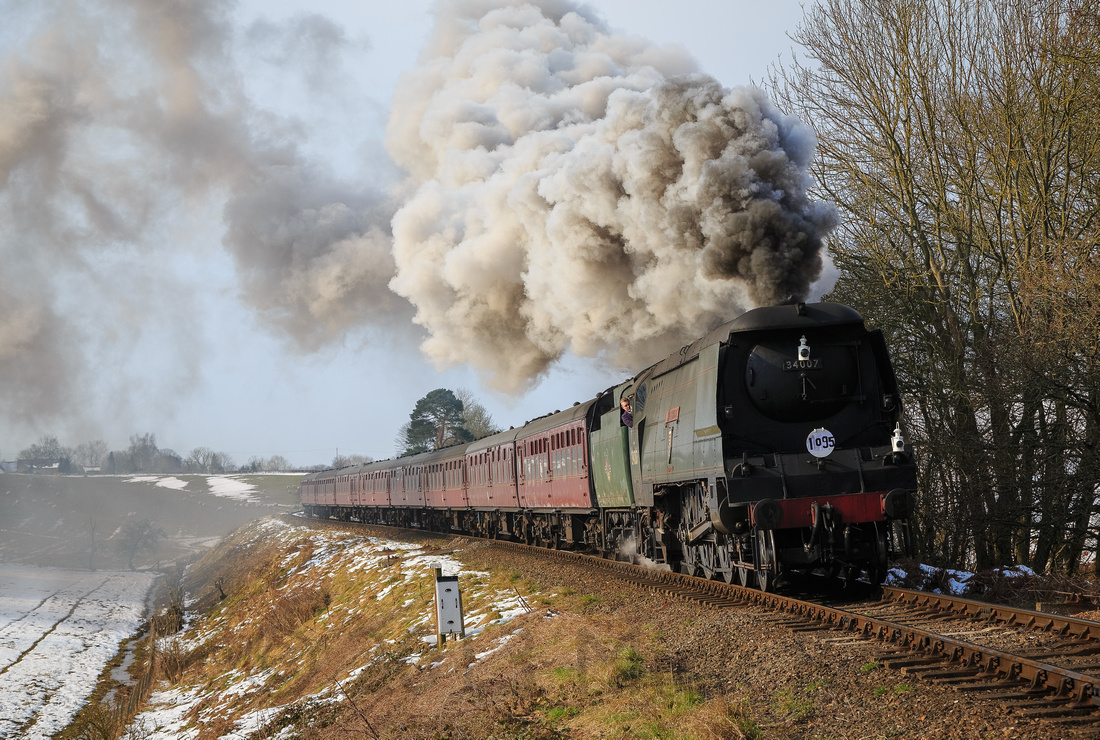 I was back at the SVR again on the following weekend - and the weather couldn't have been better with bright sunshine most of the day but not too warm to affect locomotive exhaust. 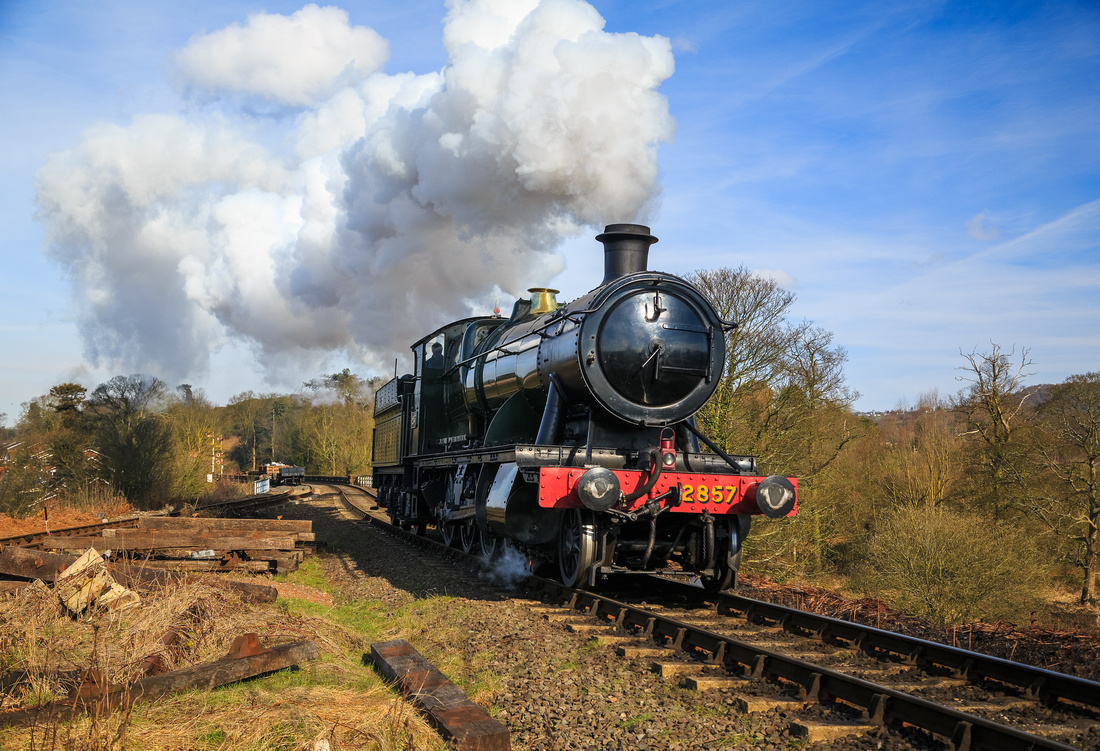 The main reason for this second visit in the matter of a few days was to make use of my newly acquired lineside permit (and getting it was a rather more protracted process than I had expected, but that's another story...) to explore a few locations that were new to me.   So far I've only covered the stretch between Bewdley Tunnel and Northwood Lane, so quite a few more miles of limeside yet to go!

There has been a bit of mainline action in the past few weeks, but the weather still isn't being co-operative. 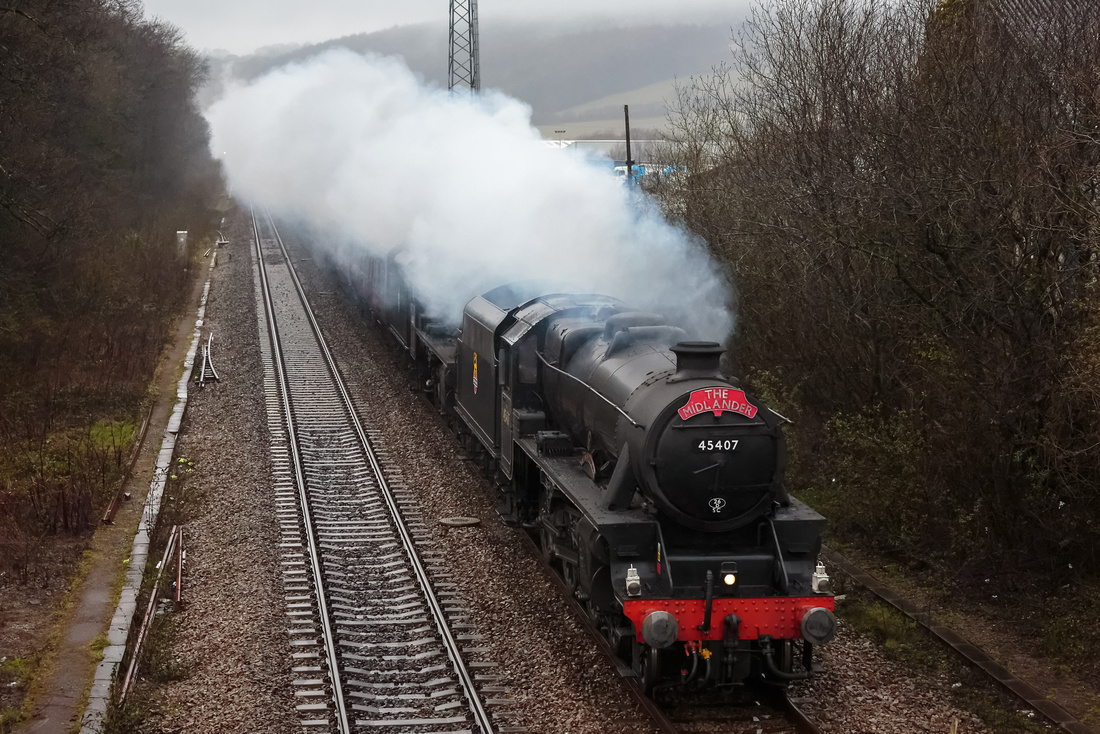 The above shot was taken at the level crossing near the Boar's Head in Tyla Garw.   The rain was hammering down, and it was still raining when I took the shot below over a week later! 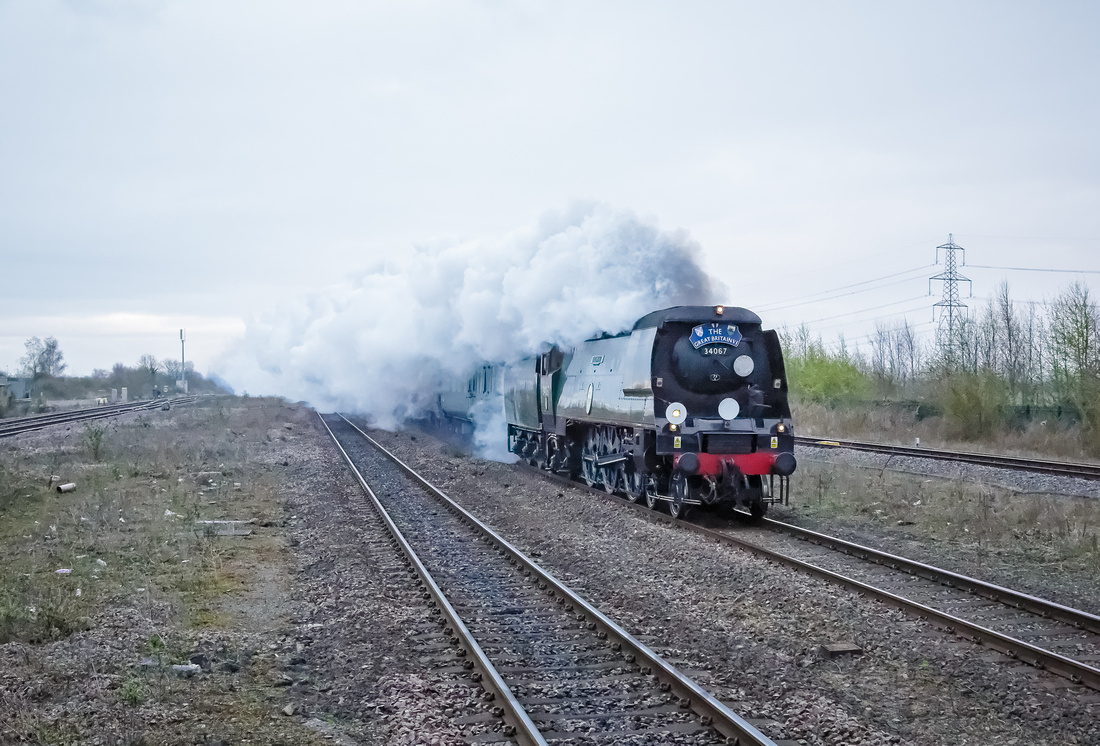 Planning on going up to the GCR for the Swithland gala tomorrow - I might just do another blog update soon...

All things considered, 16th March turned out to be a really good day.   The fact that my outing to the WSR Spring Steam gala was curtailed by the weather was more than made up for by Wales administering a damn good tatering to England at the Millennium Statdium in Cardiff - and I managed to ge t home in time to watch most of the second half!

Despite it raining all the way down the M5 en route to the WSR, the sun had come out by the time that the first working of the day appeared at Cottiford bridge, and it was a goods train to boot! 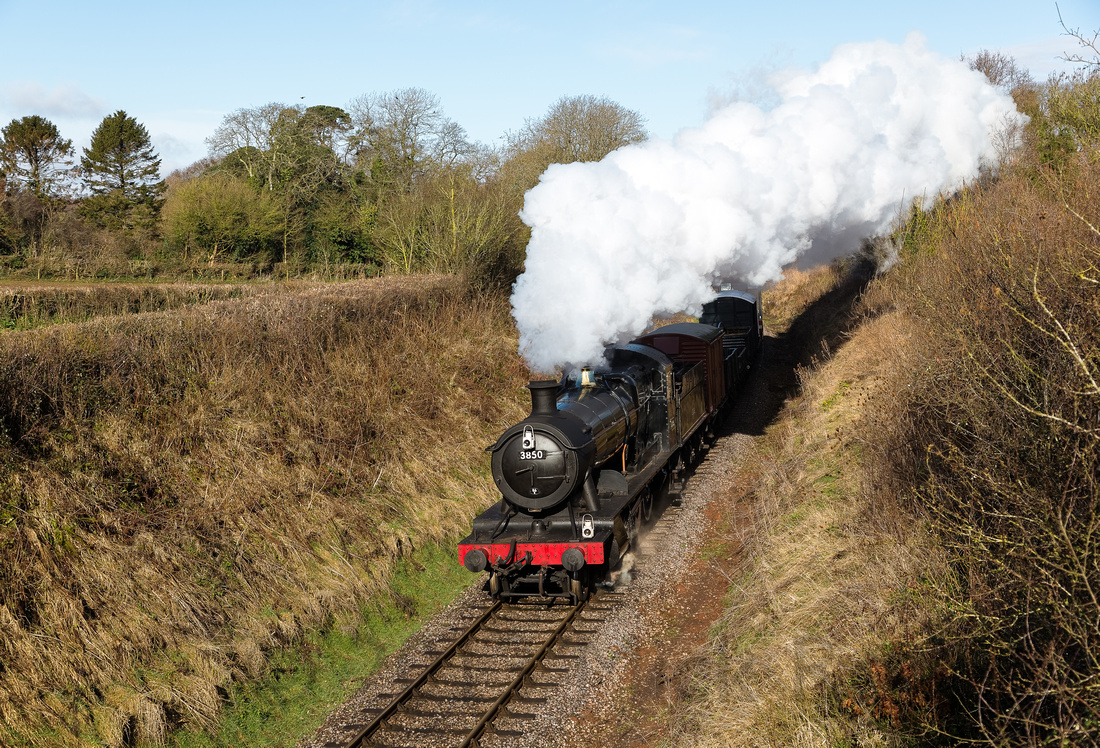 Although conditions were never quite as good again for the rest of the day, I still managed to get some good shots of the three gala guests, starting with USATC S160 2-8-0 no. 6046 at Mineral Line bridge in Watchet. 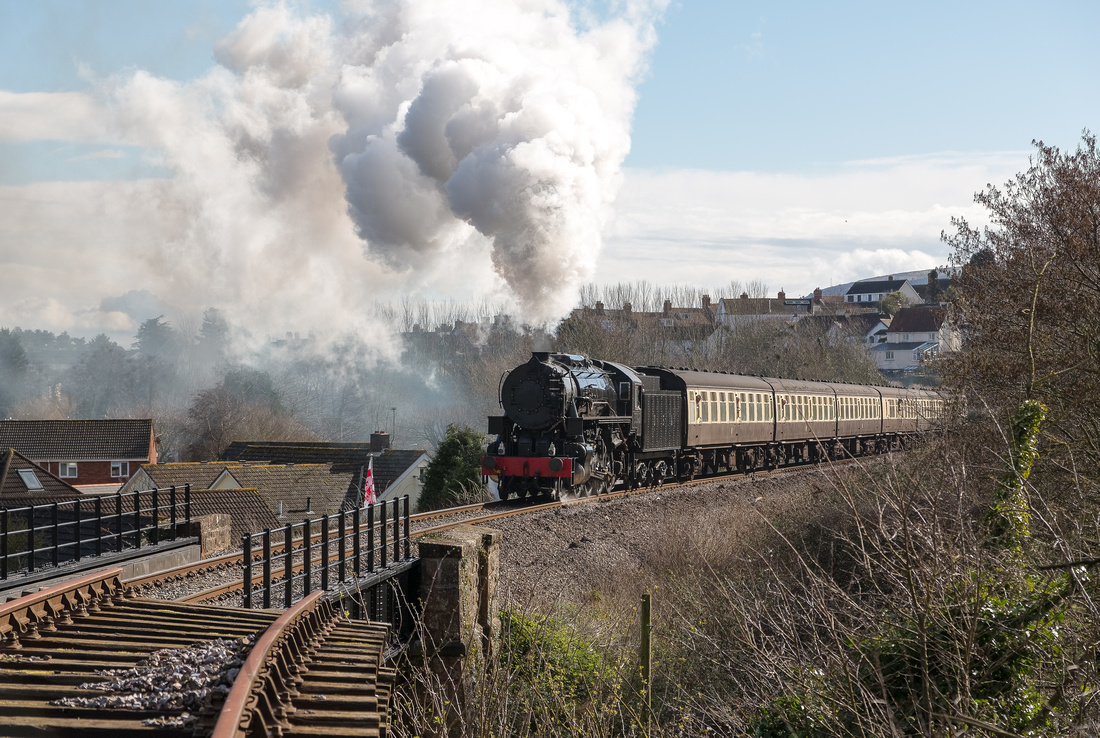 The stack of track panels in the foreground has been there for a year or more now - you'd think that the WSR would have moved them by now, even if they're only good for scrapping.   Anyway, it was on to Dunster, a quintessential country branchline station, for my next stop to see GWR steam railmotor no. 93 working the shuttle service from Minehead.   Having only a four minute turnaround, you can see why the GWR first developed the concept which underlies modern multiple unit operations. 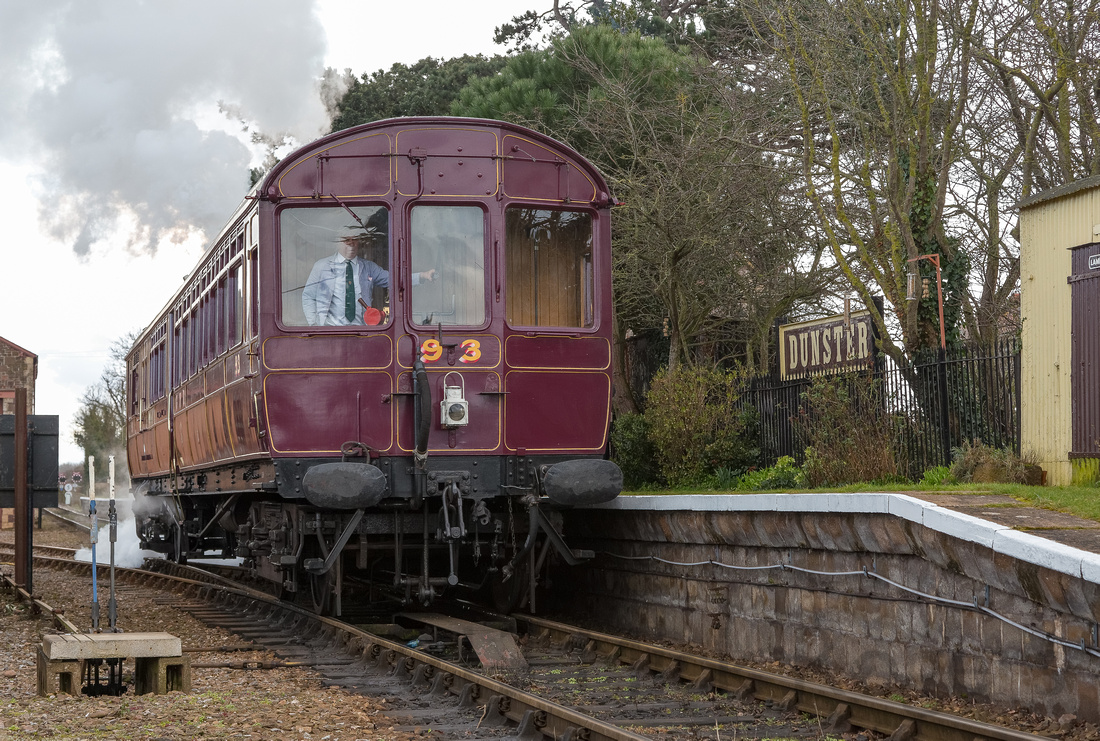 A run up to Minehead on the next service train followed, and as you can see from the shot of Sir Lamiel below, the sun hadn't quite given up for the day. 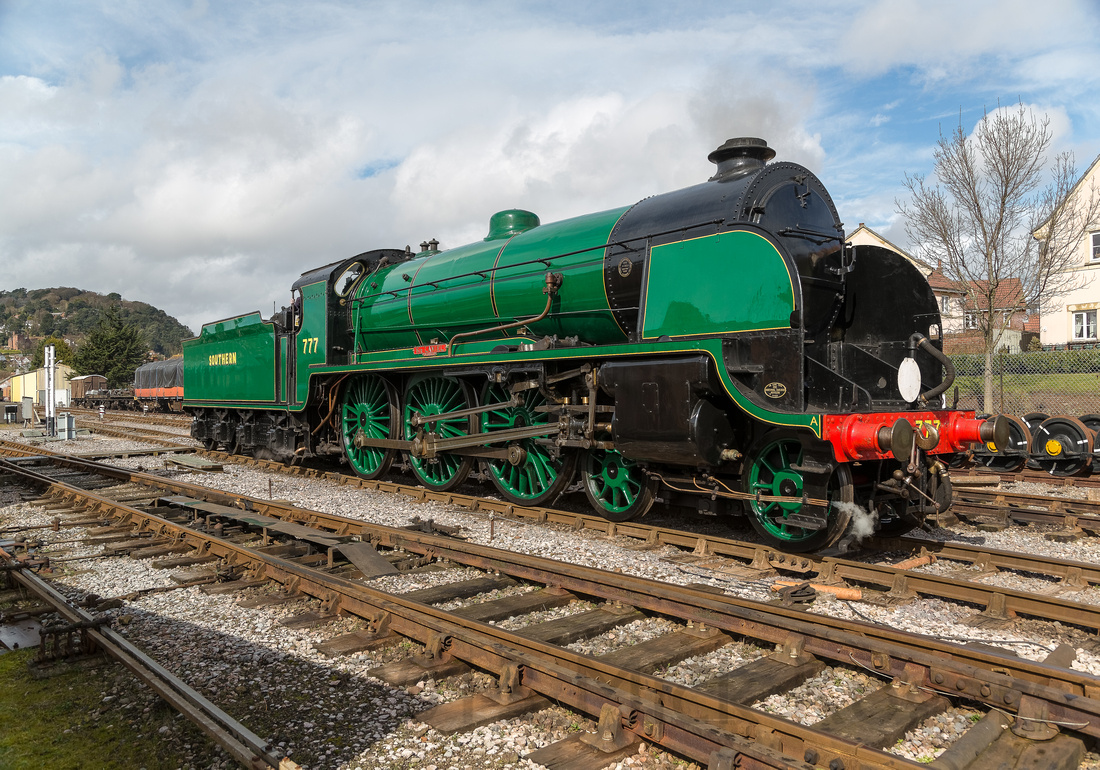 The good weather came to an end at around the time I left Minehead to get back to my car at Dunster in order to photograph the next few trains at a number of locations between Blue Anchor and Doniford before heading off to Bishops Lydeard station.    This is achievable due to the combination of the  somewhat indirect route of the railway compared to the local roads and the leisurely pace of the trains.   Things were distinctly gloomy by the time that I photographed 6960 at Doniford Halt. 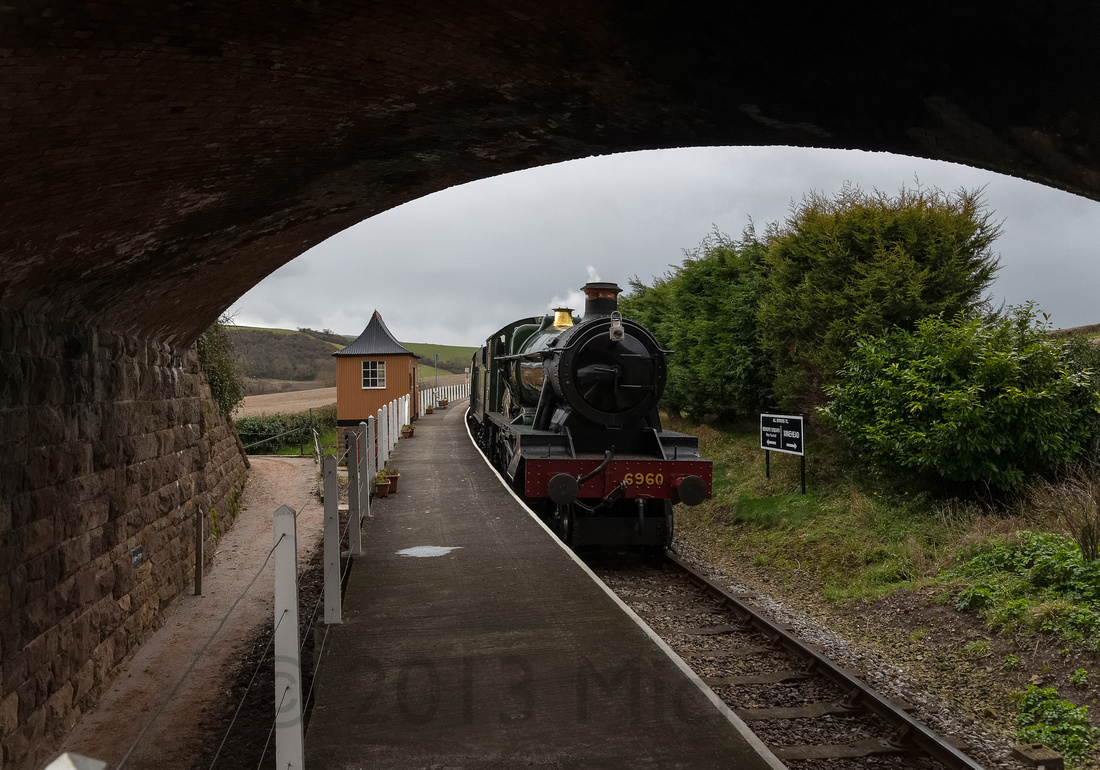 Before heading for home I decided to take the last autotrain shuttle from Bishops Lydeard down to Norton Platform to get out of the rain for a while and also to travel on this stretch of the line for the first time.   Just about managed to see WSR Mogul no. 9351 as it completed its turning manouvre on Norton Triangle in the encroaching gloom. 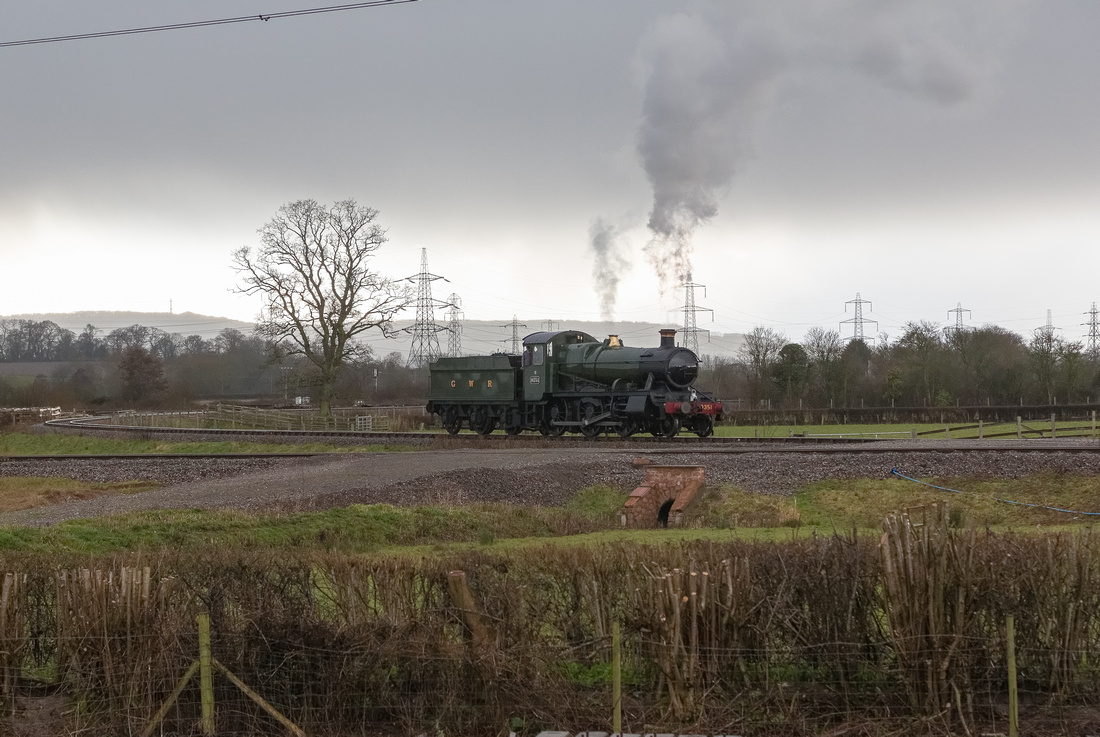